The Meaning of Sha-dai:
Protector of the Body/Connector to the Heart

In my journey as a Jewish artist-turned-teacher, I have met thousands of people of all walks of life.  Through my artwork, I share Judaism with humanity.  In this 26-year process, I have meditated and thought about Sha-dai–a particular name of G-d–because my artistic inspiration and output have been constantly drawn toward it.  My purpose in writing here is to share the messages of the word Sha-dai (the Hebrew letters Shin – Dalet – Yud) on the mezuzah scroll and other ritual objects, which I believe is of utmost importance. I am proposing a novel and personal point of view that seems to have been overlooked by many Torah scholars.  Upon reading this article, Rabbi Yitzhak Breitowitz stated that this article is,  “is very beautiful and it can certainly be a source of Torah wisdom and insight that you can incorporate into your daily lives.”

The literal translation of G-d’s Name Sha-dai is “Al-mighty.”  This name of G-d or its abbreviation (simply the letter shin

) is found on the mezuzah case or scroll, the tefillin, in the Priestly Blessing, and among other ritual objects.

The Mezuzah Scroll
Many lessons can be learned from the Jewish ritual object, the mezuzah scroll. It is a specially made sheet of parchment upon which a Jewish scribe (sofer) writes the verses of Deuteronomy 6:4-9 – “Hear, O Israel, the L-rd is our G-d, the L-rd is One. You shall love the L-rd, your G-d, with all your heart, with all your soul, and with all your might. And these words which I command you today shall be upon your heart… And you shall write them on the doorposts of your house and upon your gates.”

The holy Name of G-d–Sha-dai–is written on the back of the mezuzah scroll.  What follows is an interpretation that is very meaningful for me.  In this way, I will tell you why I think the mezuzah holds a key to increasing peace in the world.  First, though, let’s look at the most common interpretation of Sha-dai. It is associated with the teaching that a kosher (correctly made and written) mezuzah scroll is endowed by G-d with the spiritual power to provide a degree of protection from harm. The presence of Sha-dai on the back of the scroll (and the letter Shin or the fully written Sha-dai on the case holding the scroll) can be interpreted as an acrostic for: “Shomer Daltot Yisrael” (“Guardian of Israel’s Doors”) or “Shomer Darchei Yisrael” (“Guardian of Israel’s Paths”). This is illustrated in the following image:

One Rabbi in Israel with whom I recently spoke made the analogy that a kosher mezuzah scroll is like a protector for its owner, similar to the concept of wearing a helmet before you go to war.  You wouldn’t leave for battle without it.  Jewish tradition even goes as far as to say that the mezuzah scroll helps to protect a person from ill health or accidents (which is why some people keep one in the glove compartment of their car).

Some religiously observant Torah scholars believe that the fact that not all Jewish people have mezuzahs on their doorposts is cause for much of the trouble in the world because the protection of the world is only partial.  Evidence of this they say, is the fact that the world is still beset with greed, violence, war, jealousy, hatred and the like.  However I feel more people of the world (not just Jews)– should be invited to incorporate the mezuzah into their lives– to the benefit of all.  This is why I would like to put forth this spiritual interpretation of Sha-dai that can inspire awareness in more people,  even to the extent that many of the world’s problems might vanish.

If you look at the word Sha-dai in Hebrew,

it has the same spelling as the word “shaudai”, which means “my breasts” (the plural of “shaud” = “breast”).  The breasts are located in the Heart-Space of a human being, and for mothers, they are the source that provides sustenance for new life.

The spelling of SHA-DAI (“Al-mighty” or literally, “He Who has [unlimited] sufficiency”) can also be translated as “My breasts”. . .  “The sustenance and nurturing that I [G-d] provide.”

I believe that the purpose of Sha-dai on the mezuzah scroll is to remind us as we come and as we go from our homes we should live with lovingkindness in our hearts—to operate the home from a place centering in the heart.  It represents the nurturing aspect of G-d, and through living in this way, the consciousness of a person will be protected.

It is this message of the mezuzah that is imperative for us to gift to humanity.  Whether a person has a kosher mezuzah scroll – or an object inspired by the ideas of the mezuzah – I believe its teachings are a light in the world.  They will have a positive effect on humanity.

Tefillin, I have discovered, is another place Sha-dai is implied—and the same interpretation can be made.  These ritual objects consist of specially prepared leather straps attached to black boxes which have Shin – for Shaddai—on the box that goes on the head.  Within the box is a longer version of the message found in the mezuzah scroll.  People wrap one box on their head and another along with straps around their hand and forearm and wear them in daily prayer.  The leather straps are wound around the hand and arm in such a way that they form the letter Shin.  Take a look at the image below.  The physicality of these objects teaches us that what we know in our head and the actions we take though our arms are connected by way of the heart. 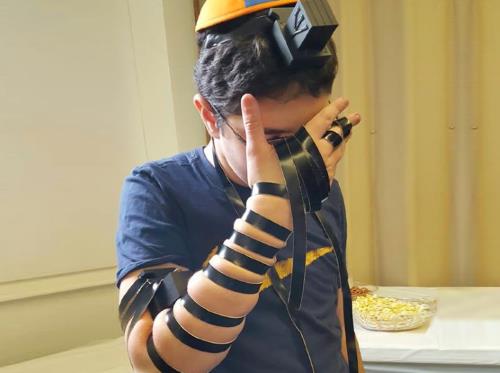 According to Chabad.org, “One of the boxes is placed on the arm so as to rest against the heart, the seat of the emotions, and the leather strap is wound around the left arm and hand. The other box is placed on the head, above the forehead. This teaches us to dedicate ourselves to the service of G-d in all that we think, feel and do.”  By living this way, we can all be connected to G-d in the most positive way and with the most positive outcome.

Interestingly, when a religious person is buried, his or her body is wrapped in a white linen shroud similar to a kittel or cotton robe that married Ashkenazi men wear on special occasions. It is tied with a sash fashioned into the Hebrew letter shin, again Sha-dai. In this case, the Kabbalists, for instance, believe that when we’re born, we are marked with an invisible shin on our foreheads. This shin is related to the life force and the nurturing aspect of G-d.  The Angel of Death then changes the shin into a taf, symbolizing death. The shin on the sash reconnects the deceased person to life–eternal life. It surpasses the power of taf or death. It is also interesting to note that the numerical value of Sha-dai in its spelled-out form equals 814, which is the same as that of the phrase “And you shall love your neighbor as yourself “. (Lev. 19:18)

Finally,  Shaddai is also associated with the Priestly Blessing.  This ancient Blessing is traditionally administered by the rabbi and/or the Kohanim (high priests descended from Aaron) who hold their hands up—gesturing the Shin—symbolizing Shaddai.  This prayer is commonly shared by parents to their children once a week at the sabbath.  Again—it is used not just for protection, but also for love and peace.  Here’s the translation of this blessing:

Here are the hand gestures:

This is the transliteration:

By combining the meanings of Sha-dai—not just protector of the body, but also connector to the Heart–our rituals bear greater meaning.  Making an effort to share this meaning and connect to our hearts when out in the world, I believe will help bring about a more peaceful world.