In early 1993, I was a sophomore at San Francisco State University and in my second semester if the ‘Metal Art and Jewelry’ class. The professor, Dawn Nakanishi, gave us an assignment designed to teach us how to use the hydraulic press. We had to cut one die to create three different pieces of art or jewelry.

My first idea was to make three lockets. (I love hinges and things that work.) The first locket would have a peace sign surrounded by petals, the next would have a heart, and the third would have a Jewish star encircled by barbed wire. I showed my designs to Dawn and she seemed both puzzled and concerned. The Jewish star ringed by barbed wire drew her attention and she wanted to know what it meant. With a lump in my throat, I whispered that my grandparents had survived the Holocaust.

Then she pointed to the piece sign and heart, and wondered why I kept using these symbols in my work. “What is it about piece and love?” she asked. “ I want you to express yourself without using a cliché.” Just like that, she rejected my project, encouraging me to dig deeper. She told me that she believed in me, and she thought I could do better.

I spent a week in anxious panic. What was it about peace? I thought. At this point, several things in my life came together. I was taking a class called ‘Holocaust and Genocide’ where I learned about the Holocaust from both a  historical perspective as well as from my family’s personal history. I went straight from that class to my metals class several times a week.

While learning about my grandparents’ experience in the Holocaust, my grandpa and I found a new connection- metal. The first time I sat down at the bench, I knew I loved working with metal. It just felt right. The hours melted away. I learned that my grandfather, along with most every male relative on that side of the family, was a machinist and tool and die maker. They owned a factory in Poland before the war where they made the machines that make candles. My grandpa began giving me his hand tools which I treasured using. (And still do!)

With all this in mind, the idea of making mezuzot materialized. I created my first die to make three different mezuzot. However, all that came out where images of flame, jail bars, decay, and pointed barbed wire. I had many intense moments of tears and revelation. I thought of why visions of peace and love were so important to me. I realized that the Holocaust was deeply influencing my life.

Once the mezuzot were finished, I explained the story behind the work to my class. I told them that I loved using the metal in such a meaningful and permanent way; and by making mezuzot, I was preserving a tradition. “But” I asked, “how could there be a God when something like the Holocaust happens?” I burst into tears. I knew, in that moment, that was my first true expression of art. 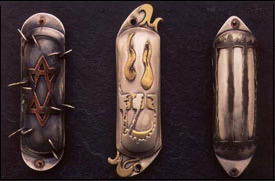 The Barbed Wire Mezuzah was later selected to travel to outer space– twice.  Click here to read the story,