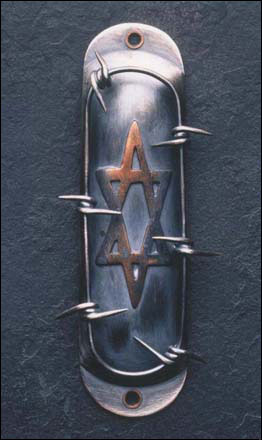 Ilan Ramon, the first Israeli Astronaut, asked the 1939 Club, a Holocaust survivor organization in Los Angeles, for a symbol of the Holocaust to take into outer space with him. The Barbed Wire Mezuzah was selected.

Mezuzah in Space: Astronaut Mike Massimino (who was Ilan Ramon’s friend from flight school) has a replica of the Barbed Wire Mezuzah with him on the Space Shuttle Atlantis to the Hubble Telescope. Check out the full story on NPR’s The California Report and on Voice of America.

Since returning from this successful mission, the replica Barbed Wire Mezuzah is on display at the Mitzpe Ramon Center which acts as a memorial museum for Ilan Ramon in Israel.