As a granddaughter of Holocaust survivors, I have never had the luxury of feeling that racial justice in America existed. Growing up in diverse Los Angeles, I have always had friends of all backgrounds and colors. Even though I feel continually outraged by the institutionalized racism in this country that exists– I know I benefit from white privilege. The first time I protested for the rights of Black people was when I was a teenager in the 1980’s in Los Angeles. That time we rallied to free Nelson Mandela. I protested again in 1992 when Rodney King was the victim of racially motivated police brutality. 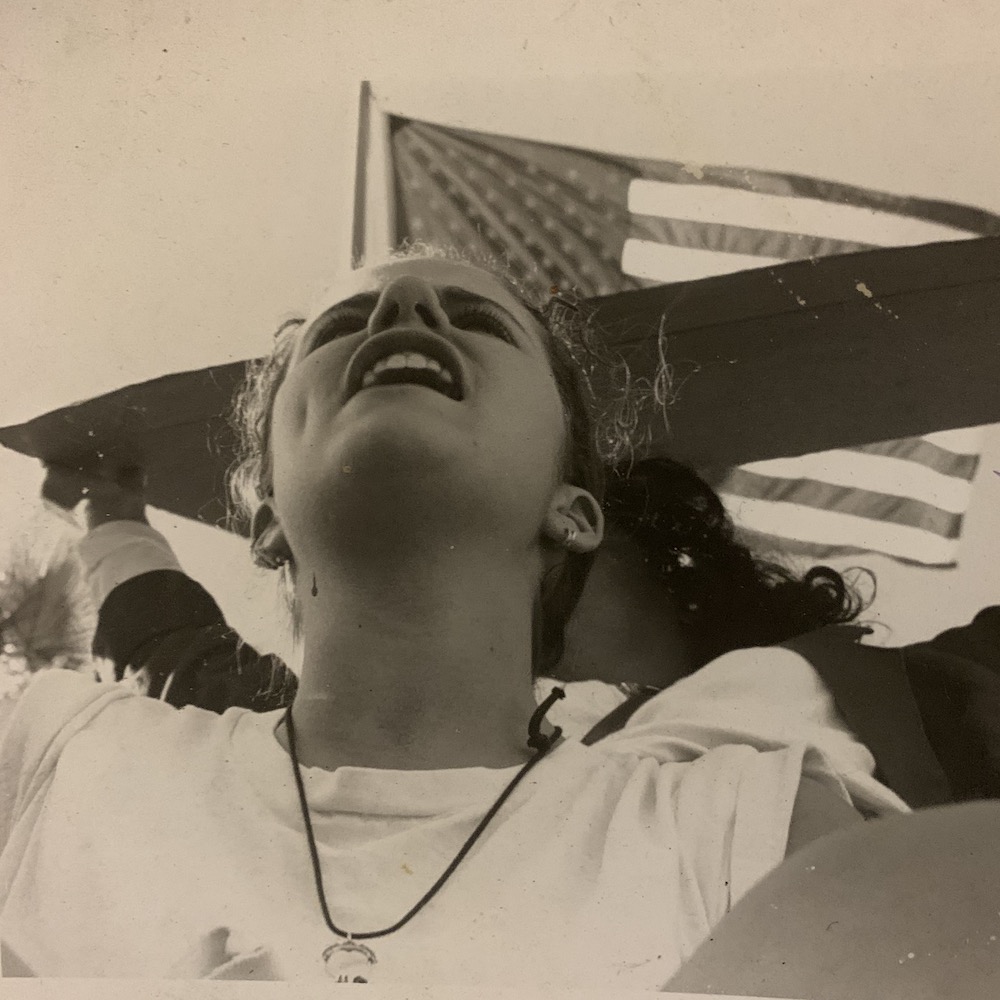 Fast forward to 2020. We have the a lying, fascist president, and GOP supporters in congress, who are tearing apart the true meaning of what it means to be American— strength in diversity, freedom, and equality. Then the pandemic– which was made significantly worse by the lack of leadership– leading to over 100,000 deaths in America– disproportionally harming people of color.  And now– just as we are all at our boiling point– racism in America’s institutions is punctuated by a few widely publicized recent killings of Black people.

I would like to start by offering my deepest condolences to the families of George Floyd, Breonna Taylor and Ahmaud Arbery and the countless others who have lost their lives in brutally racist police activity or related violence. Or, in the case of Amy Cooper, who last week used her whiteness to threaten the safety of a Black man birdwatching in central park—we are bearing witness to the deep injustices built into our justice system.  Thankfully Christian Cooper caught his abuse on video– and it struck more justified outrage.

I watched in horror not only at these murders, but also the lack of accountability on behalf of these victims and their families by the people who are supposed to be our leaders—upholding the values of “freedom and justice for all.” As Jews, Holocaust survivors, Americans, human beings, we must help bring real justice to the world.

Black lives don’t JUST matter—they are PRECIOUS. Ruach Elohim—the divine breath of life is sacred within each of us.  Embrace this Oneness.

In an effort to address these ongoing atrocities, and to work towards systematic change, I have compiled resources from my friends, colleagues, the Union of Reform Judaism and their partner organizations, as well OutVote, DoTheBay, and other local and national sources.

I am asking you to join me and stand up and take action– do what you can– there are so many ways to help:

The National Museum of African American History and Culture (Smithsonian) has a comprehensive site for guiding conversation, talking and thinking about race, and choosing antiracist identity.

What is Systematic Racism? – an easy-to-understand video series
• History of Racist US Laws and their effects throughout American history
• The Case for Reparations – article by Ta-Nehisi Coates, The Altantic
• The Road Not Taken – Housing and Criminal Justice 50 Years After the Kerner Commission Report
• Social Exclusion: The Decisions and Dynamics that Drive Racism
• Lynching in America: Confronting the Legacy of Racial Terror – Equal Justice Initiative
• Educational Resources via Black Lives Matter
• Anti-Racist Reading List – compiled by Ibram X. Kendi, NY Times

Here are some other book suggestions to add to your library:
• The Color of Love by Mara Gad
• White Fragility by Robin Deangelo
• Between the World and Me by Ta-Nehisi Coates
• The New Jim Crow by Michelle Alexander

From OutVote:
Explore Campaign Zero’s #8Can’tWait campaign. Educate yourself on concrete policies proven to decrease police violence, and check which still haven’t been implemented by your city. Contact your mayor or sheriff’s office to demand action.

Listen to Outvote’s own Mungi Ngomane discuss race in America on The Brand is Female podcast. Mungi and her mother, the granddaughter and daughter of Archbishop Desmond Tutu, share their thoughts on the struggle for racial justice informed by their family’s history of defending human rights.

Engage with these scaffolded anti-racism resources. This list of activities, books, podcasts, and more encourages you to evaluate where you are in your anti-racism journey and grow toward the next stage of allyship.

The Government Alliance on Race and Equity is a national network of government working to achieve racial equality and advance opportunities for all.  Click here to access their website and learn more.

Jews for Black Lives can click here for more resources.

Join the Obamas in their Anguish and Action Campaign.

Consider giving to the Minnesota Freedom Fund
https://minnesotafreedomfund.org, a community-based non-profit in Minnesota that pays criminal bail and immigration bonds for individuals who have been arrested while protesting police brutality, or more locally to People’s Breakfast Oaklandhttps://linktr.ee/PBO, a Black grassroots organization raising money to bail out protesters in Oakland.  Looking for more Minnesota based resources? Support these Minnesota-based organizations working to advance racial equity.  Reclaim the Block is maintaining a list of organizations most in need of resources as Minnesotans work toward progressive change.

Or you can consider supporting the Black Visions Collective https://www.blackvisionsmn.org, a Minnesota-based black, trans, and queer-led organization committed to dismantling systems of oppression and violence, and shifting the public narrative to create transformative, long-term change.

Here are some other places you may want to donate:
NAACPLDF, ACLU, The Loveland Foundation, National Bail Out Fund, Brooklyn Bail Fund, and Know Your Rights Camp.

TEACH YOUR CHILDREN: If you have children and have not yet had a conversation with them about this week’s tragic events and the long history that has led up to this moment, now is the time. Even young children can engage in deep conversations about fairness and how we should not judge by the color of our skin. Older children can learn from you that racism is real, that protest has long been an American tradition, and that we cannot equate loss of life with loss of property. Teach them George Floyd’s name and that he deserves to be remembered.
Here’s a great list of resources for teaching children:
https://docs.google.com/document/d/13af4vdtX8lFxKgHqNfDoK6VGBIYFfn14-PFQslh7aLY/edit?ts=5ed7de22
Plus one morel resource: https://www.usatoday.com/story/news/nation/2020/05/31/how-talk-kids-racism-racial-violence-police-brutality/5288065002/

3. Don’t let white emotions dominate spaces.
Jones and Okun explain that often, dominant groups believe “that those with power have a right to emotional and psychological comfort,” and we often take up a lot of space to emote, intellectualize, and seek comfort. In the process, we can cause unintentional harm – although we’re trying to do the exact opposite. (Read about the phenomenon of “white tears” in multiracial settings.)
Now is a time for white people to listen, sit with our discomfort, and take action (as outlined below) in our communities. When we are given the gift of multiracial or cross-racial dialogue, we can practice taking up less space and sitting with our discomfort (including processing our emotions with other white people).

4. Center the voices of People of Color.
We encourage you to listen to and to share episodes of the podcast, Wholly Jewish, whose first season features one-on-one interviews with Jews of Color discussing their experiences, insights, and how their intersectional identities enrich and create a more vibrant Jewish community. You can also read Chris Harrison’s powerful new essay “The Black Jews Are Tired” as well as past essays from Jews of Color on a variety of topics relevant to Jewish life.

5. Contact your elected officials.
If you’d like to contact the Minneapolis DA’s office to ask for murder charges to be brought against the police officers who watched and did *nothing* while a fellow officer murdered George Floyd, here is the contact info:

Across the nation, police officers do vital and heroic work to keep communities safe – yet racism has existed throughout U.S. history, creating systems that have resulted in the disproportionate use of force against people of color.
Today, Black men and boys are 2.5 times more likely to die during a police encounter than their white counterparts. Individuals from minority communities are also more likely to be stopped by police, and those stops are more likely to result in frisks, searches, and arrests than those involving white individuals.
Use the RAC’s action alert to easily contact your members of Congress to urge them to prohibit racial profiling and deem maneuvers that restrict the flow of blood or oxygen to the brain by law enforcement to be federal civil rights violations.

6. Take part in justice efforts led by communities of Color.
We stand in solidarity and action with the NAACP’s #WeAreDoneDying campaign, a multi-pronged effort that reminds us, “As the world faces unprecedented times and new realities during this global pandemic, and incidents of hate and domestic terrorism are perpetuated leading to routine brutalization of African-Americans, the health and safety of [People of Color] are at an unparalleled risk.” The campaign includes a petition calling for justice for George Floyd, as well as action steps related to criminal justice, economic issues, health issues, and voting rights/access.

We also support and encourage participation in The Poor People’s Campaign: A National Call for Moral Revival, an effort to confront systemic racism, shift the moral narrative, impact policies and elections, and build lasting power for poor and impacted people. Join the Reform Movement on June 20 – 21 as we take part in the Poor People’s Campaign’s Mass Poor People’s Assembly & Moral March on Washington.

7. Join the Reform Movement’s civic engagement campaign. VOTE!
Our tradition teaches, “A ruler is not to be appointed unless the community is first consulted” (Talmud Brakhot 55). Yet underrepresented communities continue the fight for equal access to the ballot, as voter suppression plagues the U.S. election system and particularly impacts communities of color.
Every Voice, Every Vote is the Reform Jewish Movement’s 2020 civic engagement campaign, a nonpartisan effort to strengthen our democracy by encouraging everyone to participate in the U.S. election and ensuring that Reform Jewish values are represented in the public square. A key tenet of the campaign is working to combat voter suppression.
Decisions that impact racial justice are made at the national, state, and local levels. Educate yourself about the candidates for office up and down the ballot, to ensure that they reflect your views and values. Visit rac.org/cec to learn more and get involved.

Next, here’s a brilliant New York Times op-ed by African-American poet Caroline Randall Williams on her being — as so many blacks in this country are, including myself — a “living” Confederate monument: https://www.nytimes.com/2020/06/26/opinion/confederate-monuments-racism.html?smid=em-share

Finally, as many people will celebrate July 4th, I have chosen not to, for many years, for personal reasons. While I don’t begrudge anyone else who chooses to celebrate, I feel no connection to an anniversary that, for the overwhelming majority of blacks in America, would’ve simply been another day in chains.

I invite you to read a 2012 reprint in The Nation, of a July 5, 1852 essay penned by one of my personal heroes, Frederick Douglass, which addresses the relationship of African-Americans to the 4th of July, which today is especially poignant: https://www.thenation.com/article/archive/what-slave-fourth-july-frederick-douglass/